Anyone who follows my blog and/or Instagram knows that I keep my eating habits fairly clean and pride myself on a healthy lifestyle. I also have a very sensitive body and it’s taken me years to find out what foods make me feel at my best.

Even with my vegan diet I can fall into a cycle of low-energy and ‘poor’ eating. My portions were too big and I was eating too late. I also didn’t feel like I had the energy to be active. I needed something to reset my body and mind back into balance – cue the 12 Day Smoothie Slim Detox.

As a vegan, drinking 3 fruit and veggie smoothies per day didn’t sound difficult, but it did sound like a great way to detox my body, shrink my stomach back to normal and hopefully get back to feeling great — and that’s exactly what happened.

As you an see… the pros well outweigh the cons.

The Smoothie Slim Detox is a 12 day plan of delicious smoothie recipes 3 times per day with 1-2 healthy snacks. It’s great because you can make all 3 smoothies in a batch each morning and divide them out for the day ahead (or even the night before).

For days that I knew the smoothie prep was a little more intensive I took the time the night before to prepare the various ingredients and snacks.

By day 6 I was 4.5 pounds down and feeling amazing. My energy levels were about double what they were prior to starting the detox and I began a new workout routine on day 7. Days 8-12 my energy continued to increase and so did my stamina.

Overall I have lost 8 pounds on the scale and gained muscle.

I now feel ready to jump back into my healthy world with better portion control and a more active lifestyle. I am on the continuous journey to be the best version of me.

Instructions and recipes for the 12 Day Smoothie Slim Detox can be found here in an incredibly affordable e-book by Your Healthy World.

Reset your body and jump start healthy habits in less than 2 weeks!

I’ve been a vegetarian, leaning towards vegan, for some time now. At the turn of the New Year I made the decision to cut the small amount of remaining animal products out of my diet. Truly the only thing left was cheese – so I figured it wouldn’t be too difficult (although I really love cheese).

There are a lot of factors contributing to this choice and it’s been a long time coming. It’s not completely based in morality and not completely in health — I suppose I’m continually on a quest to find a diet that makes me feel the best that I can on a physical and spiritual level. I have found that right now this means eating as cleanly as possible. But even clean eating has it’s indulgence.

I found mine at Evolution Fast Food in San Diego. Vegan fast-food joints are popping up all over to provide plant-based eaters with versions of taboo items like cheeseburgers, tacos and milk-shakes. Chefs are finding amazing ways to create completely vegan-friendly substitutions for even the richest animal product foods.

Evolution is situated just outside of Balboa Park and next to another vegan restaurant Donna Jean which I’m sure I’ll talk about in another post. Evolution is even equipped with a drive-thru; as any good fast-food place should be. I stood looking at the menu for much more time than I should have, but there were so many amazing choices that I wanted to order everything! I settled on a few ‘classics’ — ‘cheeseburger’, chili ‘cheese’ fries and a chocolate shake.

*Besides becoming vegan by choice I am also plagued by multiple food intolerances including soy and gluten. This can make finding vegan substitutions difficult. I often choose to avoid substitutions altogether and stick to plant-based home cooking.

I was visibly excited as I awaited my name to be called and to be handed the brown paper bag of vegan goodness.

*Evolution offers vegan shakes and ice creams, but I opted for a smoothie called ‘Mystic Monk’. 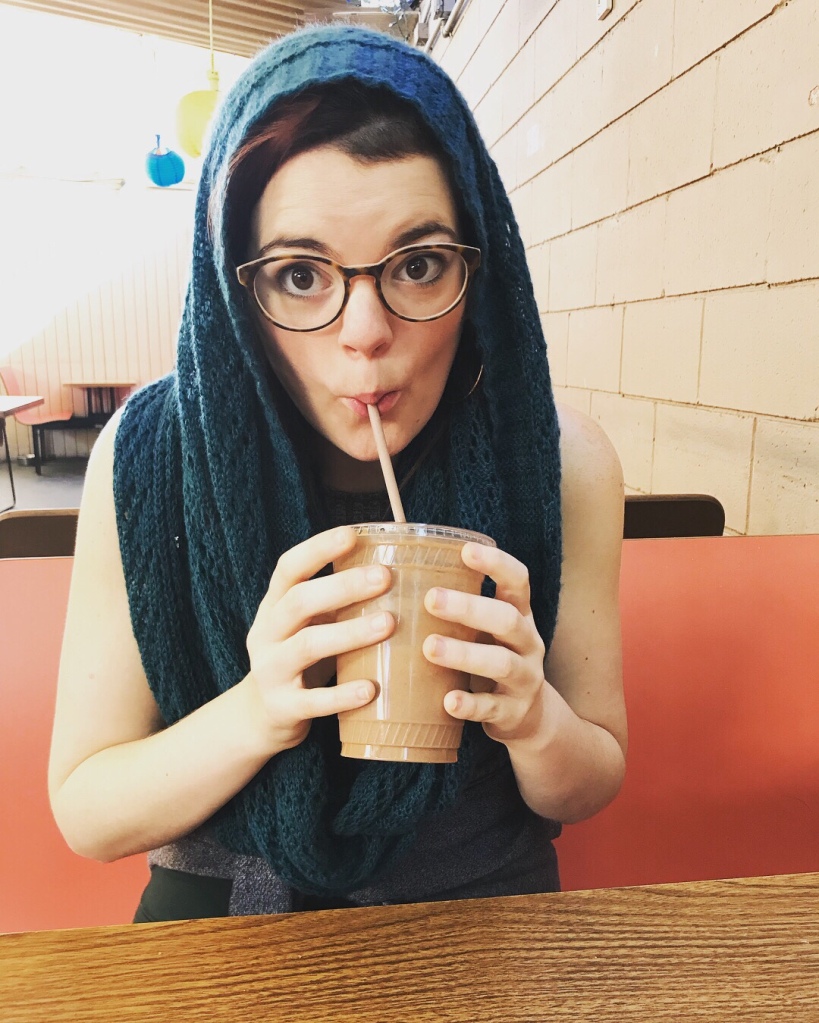 Verdict – absolutely delicious. And this fast food meal didn’t leave me feeling bloated and with an upset-grease filled stomach. Even for non-vegans I believe plant-based fast food restaurants like ‘Evolution’ are a great option.

There’s a lot of controversy surrounding vegan diets, and I consider myself on a continual learning-based journey that will shape the way I live my life – including diet. Here’s the way I see it.

I like animals. I don’t agree with the production-line food industry that we have created in this society on many, many levels. I feel better when I am not consuming meat and dairy. By choosing a diet that makes me feel good physically I also excuse myself from supporting a corrupt industry that I find to be unethical on the levels of animal treatment, honesty in business, and environmental impacts.

This is my only body and my only earth. I hope to continue finding ways both big and small to take care of it.

I know that there are farmers, businesses, chefs and consumers dedicated to operating according to the best possible standards of food production and preparation both plant and animal based. I choose to opt out of animal-based consumption as I don’t feel I have the resources or time to support these operations on a scale that would make me comfortable enough to do otherwise. To those under the category described above – thank you.